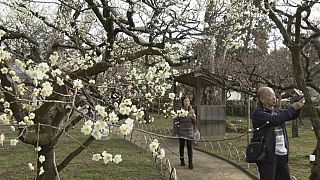 Traditional music, splendid costumes, flowers and green tea: this is how Japan celebrates the plum blossom festival every year at a shrine in Kyoto.

Some 1,500 plum trees are now in full bloom at Kitano Tenmangu Shrine, which is dedicated to ancient scholar Sugawara no Michizane.

The shrine holds the ceremony every year on February 25, the anniversary of the scholar's death.

On Monday, Shinto priests made offerings of red and white plum blossoms at the main shrine to the accompaniment of traditional Japanese court music.