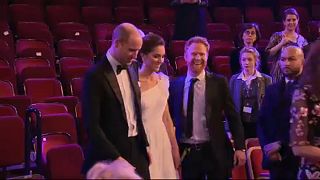 Real royalty met acting royalty at the BAFTAs on Sunday night, as the Duke and Duchess of Cambridge congratulated the winners after the ceremony.

Prince William is the president of the British Academy of Film and Television Arts. The 72nd BAFTAs ceremony was held at the Royal Albert Hall in London.

The Duchess of Cambridge wore a white one-shoulder Alexander McQueen gown and Jimmy Choo heels to the event.