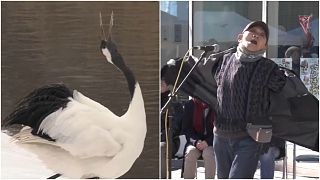 Contestants have mimicked cranes for a winter festival in Japan's northernmost prefecture of Hokkaido.

The event was held on Sunday in the village of Tsurui, where red-crowned cranes spend the winter. The species is designated as one of Japan's special natural treasures.

The participants included children and elderly people. In one contest, they mimicked the birds' calls by shouting into a microphone. Visitors laughed when some of the contestants tried to imitate cranes flapping their wings.

In another contest, barefoot people wearing crane costumes stood on one leg in a small tub filled with snow and tried to stay upright for as long as possible.

One of the winners said he feels he has become a red-crowned crane. He also said he's happy he could win after taking part for the second year in a row.