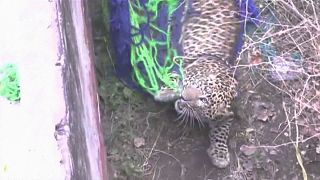 A panicked leopard ran through the streets of the northern Indian city of Jalandhar this week, injuring at least four people before it was captured.

The wild cat was first spotted inside a house on Thursday morning, with police and Forest Department officials arriving on the scene to capture the animal.

However, video footage captured the moment that the leopard attacked an official before running away through an alley and across a nearby field.

Injuries sustained by people during the attack were not life-threatening.

The leopard was on the loose for 12 hours before being caught by officials, according to reports.

Conflicts between humans and animals are on the rise in India, where people have begun living in areas near and even inside reserves.