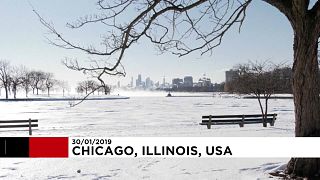 Residents across the US pulled out their heaviest winter coats as a torrent of polar air brought record-low temperatures to the North American on Wednesday, making conditions so unbearable that trash haulers stopped making pickups and mail carriers suspended deliveries.

Snow and heavy winds battered the town of Buffalo, New York, which sits on the Canadian border.

In a video shared on social media, Wisconsin father, Jeremy Bourque, can be seen throwing a large pot of boiling water into the air, which instantly turns to snow.

The bitter cold was brought by the polar vortex, a stream of air that spins around the stratosphere over the North Pole, but whose current has been disrupted and is now pushing south.