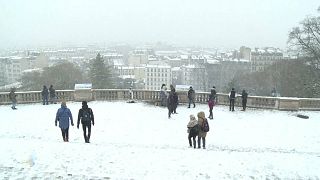 Paris turns white in first snowfall of the season

The French capital turned white on Tuesday thanks to the first snowfall of the season.

A large part of northern and central France was placed under orange alert by French weather forecaster Meteo France, with up to 10 centimetres of snow expected in some places.

Road traffic is usually crippled in France during major snowfall.