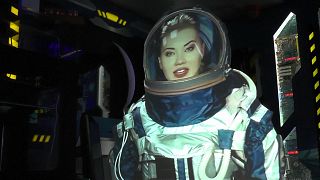 Crimea is usually seen as a tourist destination in the post-Soviet space, with its many beaches and picturesque mountains.

The resort town of Alushta, replete with mountains and beaches, now has something more unusual to boast: an entirely indoor amusement centre that is made to look strikingly similar to spaceships in Hollywood sci-fi films.

Aptly named "Guardians of the Empire", it includes influences and references to a wide range of sci-fi stories.

A space traveller exploring the neon-lit passages of the ship may encounter a captured alien, a hibernating cyborg or stumble upon an arsenal of laser guns.