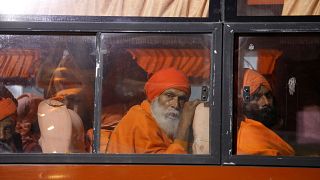 Indian city gets artistic makeover ahead of Hindu pilgrimage

The Indian city of Prayagraj has been transformed as entire swathes of the city have been painted in a campaign to celebrate the Hindu pilgrimage of Kumbh Mela.

Walls, flyovers, and the sides of buildings all across the northern city have been painted in colourful depictions of various traditional Hindu beliefs as well as prominent politicians, Bollywood stars and freedom fighters.

The Kumbh Mela is a mass Hindu pilgrimage in which Hindus gather to bathe in holy waters and is traditionally held every four years in one of four cities along India's sacred rivers.