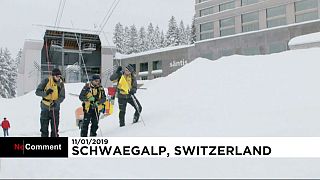 Three people received minor injuries when a hotel in eastern Switzerland was hit by an avalanche on Thursday, police in the canton of Appenzell Ausserrhoden have said.

They also said a search for people who may still be missing has been called off for the night because of heavy snowfall and the risk of further avalanches.