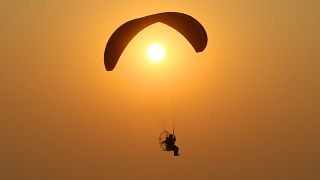 An experienced paraglider had a shocking encounter with a dust devil while preparing for a flight in Manilla, New South Wales, Australia on January 2.

The man, who was visiting from overseas, was one of 40 paragliding pilots setting up to take off for a cross-country flight from a popular launch spot on Mount Borah in the north-west.

A dust devil rapidly formed and raced across the launch area, catching the paraglider and flinging him into the air.

In this video, filmed by the man’s wife, the paraglider is lifted up and swirled around for a few seconds before being ejected out to the side of the fast-rotating dust devil.