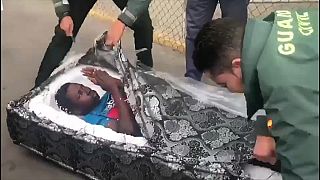 Spanish border officials at the country’s frontier with Morocco in Melilla uncovered two migrants trying to enter the country while hidden in mattresses on Sunday.

Guardia Civil officers lifted two hollowed-out mattresses off the roof of a vehicle on Sunday, before cutting them open to reveal two males inside.

The driver of the vehicle fled to Morocco before being arrested by authorities, according to local media reports, which added that Sunday’s incident was the first attempt to smuggle people across the border inside a mattress.