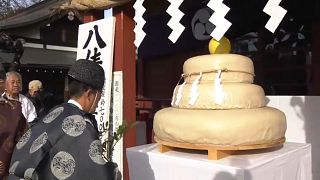 Watch: A giant rice cake at a shrine north of Tokyo to pray for a good harvest year

A giant rice cake was placed at a shrine north of Tokyo to pray for a good harvest and the safety of the region in the coming year.

People in the town of Takanezawa, Tochigi Prefecture, observe the ritual every year. The three-layer rice cake weighs about 700 kilograms and is 90 centimetres high. The lowest layer is more than a meter wide.

A forklift was used to place the lower two layers onto a platform in front of the prayer hall of the Yasuzumi Shrine.

Worshippers and shrine maidens worked together to place the third and lightest layer on top of the others.

The rice cake will be on display until January 20th.