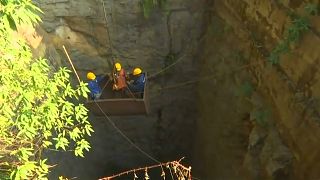 High-pressure pumps and divers from the Indian Navy were brought to Ksan in northeastern India on Saturday (December 29) to aid rescue operations for 15 coal miners trapped underground.

The group have been stuck since December 13 after floodwaters rushed through an illegal "rat-hole" mine.

Indian Navy diving experts were lowered into the flooded mine for an inspection ahead of rescue operations set to resume on Sunday (December 30).

Ten high-pressure pumps will be used to flush out water from the pit to allow divers to reach the trapped miners.

The mine is an old, illegal so-called rat-hole mine, common in Meghalaya but dangerous as the coal is pulled out from narrow, horizontal seams.

Workers, including children, descend hundreds of feet on bamboo ladders to dig out the coal, often leading to accidents.