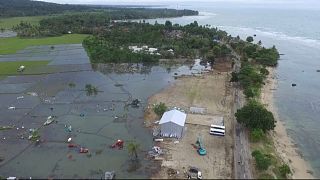 Indonesia warned of fresh activity at an erupting volcano on Thursday, raising the danger alert.

The volcano sparked a tsunami at the weekend killing more than 400 people.

Authorities also increased the size of a no-go zone around volcano, Anak Krakatoa and warned residents to stay away from the coast.

At least 430 people were killed in the disaster, with 1,495 people injured and another 159 were missing.

Nearly 22,000 people have been evacuated and are living in shelters.