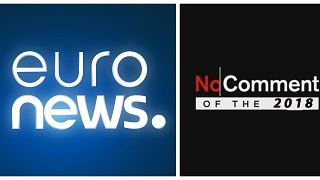 Watch: The best of Euronews' No Comment videos from 2018

From the horrors of war in Syria to tuna tossing in Australia and mocking May to deadly earthquakes in Indonesia, these are the best No Comment videos from 2018.

Russian President Vladimir Putin stripped off to his bathing trunks and immersed himself in the freezing waters of a lake in January, observing an Orthodox Christian ritual to mark the feast of Epiphany.

With his coat and boots removed, he then walked down a set of wooden steps into a hole in the ice, crossed himself, and dipped his head under the water before surfacing.

Air temperatures at the time were around -6°C.

Each year at Epiphany, Orthodox believers immerse themselves in rivers and lakes to commemorate the baptism of Jesus Christ in the River Jordan.

As president, he has become a frequent attendee of Russian Orthodox ceremonies and has given the church a major voice in society.

In Australia, spectacular tosses were on display at the Tuna Tossing World Championships.

Tourists and locals launched rubber fish over long distances to compete for a 1,000 AUD cash (€628) prize.

The horrors of the war in Syria

Earlier this year, people in the Damascus suburb of Eastern Ghouta were bombarded for days in attacks that left many observers speechless.

Rather than describing the scene, we want you to be able to see it for yourself. The video shows the reality of modern war. The scenes are violent and disturbing.

'US Embassy' road signs in Jerusalem

At least three road signs reading "US Embassy" went up in Jerusalem after US President Donald Trump controversially recognised the city as Israel's capital.

Built especially for the occasion, the replica Windsor Castle is made up of 39,960 Lego bricks.

Despite being situated just three miles (five kilometres) from the real castle, it's the first time Windsor Castle has been added to the resort's Miniland attraction.

Achilles, a white-haired, deaf cat was designated as the official World Cup 2018 forecaster.

Like Paul the Octopus before the 2010 World Cup, Achilles 'predicted' the winners of matches by choosing between two boxes containing food.

"We chose Achilles because he is handsome, but also because he is deaf like all blue-eyed white cats," said Anna Kondratieva, a veterinarian at the Hermitage Museum in St Petersburg.

"He sees with his heart," she added.

Colachos jump over Spanish babies to bring them good luck

Men representing the devil, known as Colachos, leapt over young babies in an ancient Spanish religious festival designed to chase out bad spirits. El Salto del Colacho or The Jump of the Colacho, takes place every year in the village of Castrillo de Murcia, near Burgos, in northern Spain.

The babies are all under one year of age and the festival is meant to represent the triumph of Christianity over evil.

It has taken place on the feast of Corpus Christi every year since the 1600s.

Donald Trump and Kim Jung Un impersonators became popular after they impersonated the two leaders during the Pyeongchang Olympics. They resurfaced again in Singapore during the US-North Korea Summit, walking around holding hands.

Lion climbs into car full of tourists in Crimea

The footage shows the lion, known as Filya, climbing over tourists and cuddling and licking them in a car at Taigan Safari Park, Crimea.

The incident happened weeks after a woman was hurt by a different lion in the same park.

Putin and Xi treat themselves to pancakes, caviar and vodka

President Vladimir Putin and his Chinese counterpart Xi Jinping demonstrated their cooking skills on Tuesday, September 11, after their talks in Russia's eastern city of Vladivostok.

With kitchen aprons on, Putin and Xi fried traditional Russian pancakes — also known as bliny — and tried them with seafood delicacies including red and black caviar.

The leaders were also offered vodka shots which they drank after toasting each other.

Istanbul: A car, motorcycle and plane race against each other

In Turkey, a motorcycle overtook a fighter plane, a commercial plane, an electric car and three sports cars during a test run on the runways of Istanbul's new airport.

On the starting line there was a 605 challenger plane, a Turkish F16, a Tesla PL 1000DL, an Aston Martin, a Lotus Evora, a Redbull Formula 1 and a Kawasaki H2R.

The bike, driven by former World Supersport Champion Kenan Sofuoglu, won the race ahead of rivals by 0.04 seconds

As he was about to speak in the gallery of a conference in Brussels, President of the European Commission, Jean-Claude Juncker, took advantage of the ambient music to show off his dance moves, that looked a lot like British Prime Minister Theresa May's robotic 'Maybot.'

The aftermath of Indonesia's deadly earthquake

The "Shrouds of the Somme" installation is a collection of 72,396 small figurines laid out in London's Queen Elizabeth Olympic Park.

Each one represents a British Commonwealth serviceman who was killed at the Somme and has no known grave.

The Battle of the Somme is one of the bloodiest battles in history. The devastating World War One clash began on July 1, 1916, along a 24-kilometre front near the River Somme in northern France, where British and French forces hoped to win a decisive victory against Germany. Around 20,000 British soldiers died on the first day alone. By the end of the battle in November more than one million men had perished and the allies had advanced just 11 kilometres.

In November, migrants left Queretaro in central Mexico en masse and headed toward the US after President Donald Trump signed a 90-day ban on migrants crossing through the US southern border.

The order, taken together with a regulation issued by the Trump administration, would effectively prevent migrants who crossed the US border with Mexico illegally from receiving asylum in the United States.

Preferring the uncertainty at the border over the certainty of poverty and crime back home, the migrants continued to head north to take their chances.

Dutch prime minister applauded for cleaning up his own coffee spill

Mark Rutte, prime minister of the Netherlands, was praised for taking the time to clear up his own coffee spill. He was filmed knocking the hot drink over as he went through security barriers at the Dutch parliament. Rutte, perhaps conscious he was on camera, went to lengths to find a mop and clean the mess up.

He was applauded by cleaning personnel before they showed him how to adjust the mop’s height to suit the tall prime minister.