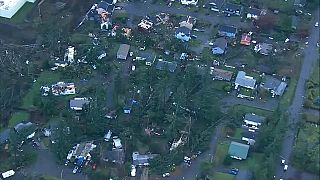 A rare tornado touched down in a Seattle suburb on Tuesday, damaging several homes and toppling trees.

Based on radar imagery and video evidence, the tornado hit south of Port Orchard shortly before 2 pm, the National Weather Service in Seattle said on Twitter.

Video from the television station's helicopter at the scene showed trees down, homes with roofs ripped off and debris scattered across gardens.

The weather service said they wouldn't be able to survey the area before it was dark and that they'd send a team Wednesday morning. They were working with emergency management partners to learn the extent of the damage.