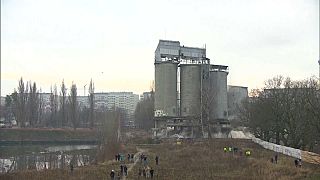 Four silos have been demolished in Wroclaw, Poland near the Odra river to make way for a new housing development.

Footage from Polish broadcaster TVN showed the controlled explosion on Tuesday that crumbled the silos with clouds of ash and smoke.

The silos were built in the late 1960s and used to store cement.

A spokesperson for the property developer said a total of 2,500 apartments will be built in the area where the silos had stood for over half a decade.