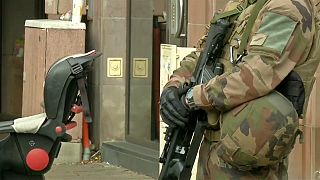 Police and soldiers on Wednesday (December 12) filled streets in Strasbourg's city centre and patrolled highways near the French-German border as a manhunt for a gunman who killed at least two people and injured 13 others at a Christmas market in the eastern city continues.

Meanwhile, lawmakers in the European Parliament in Strasbourg held a minute's silence on Wednesday, paying tribute to the victims of a gun attack in the city.