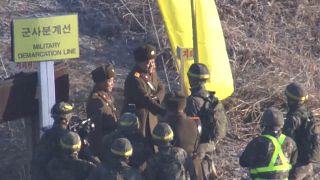 Soldiers from North and South Korea crossed into each other's territory peacefully for the first time on Wednesday, Seoul said, as they began checking the dismantlement of guard posts in the Demilitarized Zone.

The North invaded the South in 1950, triggering the Korean War, and Seoul went on to change hands four times as Pyongyang's Chinese-backed forces and the US-led UN troops supporting the South fought their way up and down the peninsula and back again.

The conflict ended in an armistice in 1953, leaving the two technically still in a state of war, but a rapid reconciliation has taken place this year.

The South's President Moon Jae-in and Kim Jong-un, leader of the nuclear-armed North, agreed to remove a limited number of guard posts along their heavily-fortified frontier at a September summit in Pyongyang, among other measures