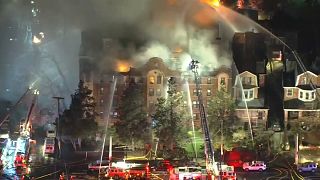 A fire gutted a four-story building early on Monday, December 10, in Philadelphia, Pennsylvania.

The overnight blaze broke out inside the building, making a portion of the building collapse, although it wasn't clear how or where exactly it started, according to local news reports.

Two firefighters suffered minor injuries battling the fire and residents were evacuated and taken to nearby shelters.