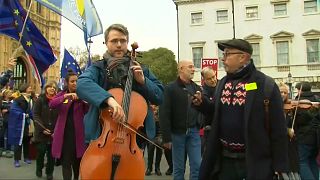 Protesters for and against Brexit expressed their dismay on Monday, December 10, after British Prime Minister Theresa May abruptly decided to pull a parliamentary vote on her Brexit deal.

Dozens of protesters gathered outside parliament, waving banners and shouting their respective slogans.

While both groups are opposed in their Brexit attitudes, demonstrators from each side were against postponing Tuesday's vote.

May's decision on the eve of the vote came after repeated warnings from members of parliament that she faced a rout against her agreement for a deal with the bloc.

The move thrusts the United Kingdom's divorce from the European Union into chaos, with possible options including a disorderly Brexit with no deal, another referendum on EU membership or a last minute renegotiation of May's deal.