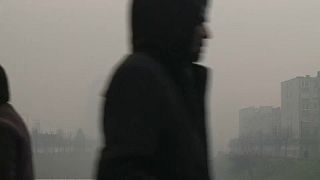 'Gilets jaunes' violence, Balkans pollution — No Comment of the week

Our first video in this week's selection takes us to the streets of Paris where protesters linked to the "gilets jaunes" (yellow vests) movement clashed with riot police under the iconic Champs-Elysees monument.

Next, we go to northern Mexico where a Cessna plane collapsed on a house in a residential area, killing four crew members and injuring two women on the ground, according to authorities.

Meanwhile, in the Balkans, air pollution reached dangerous levels this week, with the Bosnian capital of Sarajevo worst hit. Footage showed the city enveloped in dense smog coming from coal-fired plants, cars and coal heaters still used in many households.

Finally, former US president George H.W. Bush's state funeral encompassed four days of events, from his arrival in Washington to his burial in Texas.