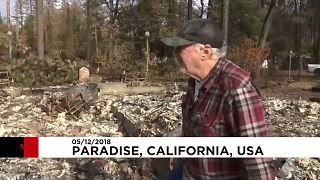 Residents return to US town destroyed by wildfire

Hundreds of residents were finally allowed back into neighbourhoods in the Northern California town of Paradise, a month after the blaze killed at least 85 people and destroyed about 14,000 homes.

Some residents were allowed back into nearby communities in the fire zone, but Wednesday marked the first time residents of Paradise got a firsthand look at what was left of their town of 27,000 people that was hit the hardest by the blaze.

More than 50,000 people in Paradise and the neighboring communities of Magalia and Concow were forced to quickly flee the wind-driven flames that charred 240 square miles (622 square kilometers).