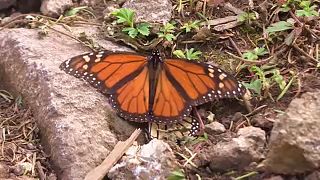 The monarch butterfly (Danaus plexippus) flies 4,000 kilometers every year from the Canada lakes region to the central Mexican forest.

They advance 75-130 km per day during migration, flapping their wings about 300 to 720 times per minute.

The monarch butterflies stay in Canada and the US between April and August.

To survive the winter, millions of them migrate to Mexico between September and October, where they stay from November to March making colonies in pine-oak trees.

During February and March, they mate before returning to North America.