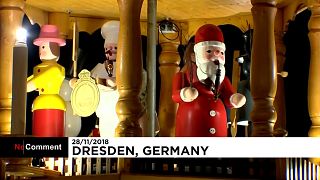 In the German city of Dresden, the festive season has officially kicked off with the traditional cutting of the famous Christmas stollen cake.

Known as Striezelmarkt, the market is celebrating its 584th opening and is set to be visited by millions in the coming weeks, despite a heightened security situation throughout German Christmas markets.

The Dresden Christmas market, held annually since 1434, is named after an old word for "stollen", first mentioned in the early 14th century.

Visitors from around Germany came to score a slice of the monster rum and fruit bread, waiting patiently in a crowd of thousands.

Slices of the traditional Saxon cake are sold with all proceeds going to charity, as per annual tradition.

Visitors said they had not been put off by fear of attacks, after a 24-year old Tunisian man ploughed a truck into a Berlin Christmas market killing 12 people in 2016.