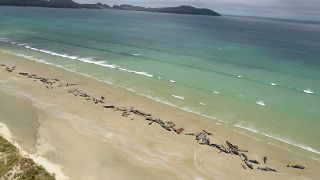 About 75 were already dead and conservation workers decided to euthanise the others due to their poor condition and remote location.

Conservation workers are hoping to save some of the eight pygmy killer whales that remained stranded on Monday at the other end of the country in an unrelated event.

FAUNA AND FLORA NEW ZEALAND
Now playing Next
no comment