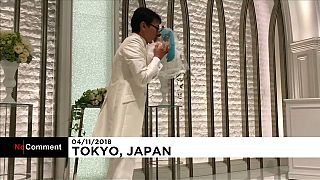 With nearly 40 wedding guests looking on and filming the special moment, Akihiko Kondo lifted up the veil on his bride and kissed her. The only catch? Kondo's bride is Hatsune Miku, a virtual reality star developed by a Japanese music technology firm.

A week after the "marriage", Kondo came home from work at a middle school in the suburbs and was greeted by the holographic projection of the love of his life who literally lights up and welcomes him home.

The hologram of Hatsune Miku recognises Kondo's face and voice with her embedded camera and microphone and can respond with simple phrases and songs.