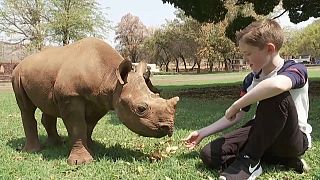 At just 11 years old, Hunter Mitchel from South Africa is already a passionate conservationist, helping to protect orphaned rhinos that wouldn't survive without his support.

The school child is already a minor celebrity in South Africa, where he speaks in front of classes and on TV to raise awareness about the threats facing the species.

His efforts to protect orphaned rhinos, whose parents have been shot by poachers, have already raised around €14,000 from donors.

Mitchel said he became involved in activism for rhinos on December 31, 2015, when he heard about an abandoned baby rhino at the Aquila Private Game Reserve.

"I knew instantly that rhinos are super endangered so I wanted to help him by raising money for him. So I asked my mum for a Facebook page because I know lots of people go there and it would be very popular," he said.

Only around 25,000 rhinos remain in the wild in Africa because of threats such as poaching.