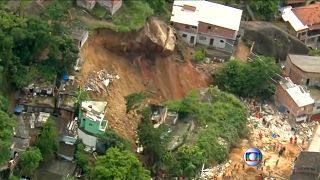 Ten people were killed and 11 injured in a mudslide near Rio de Janeiro on Saturday, Brazilian authorities said.

Rescue workers searched for victims and survivors trapped under debris and mud.

The Rio fire department said a three-year-old boy, two elderly women and a middle-aged man were among the victims. It did not give any further information.

Pastor Pedro Paulo dos Santos said the situation in the Boa Esperanca neighbourhood was "a scene of desperation, of crying".