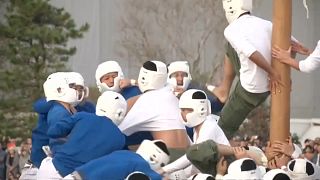 Hundreds of cadets at the Japanese National Defence Academy on Sunday took part in one of Japan's great spectacles, the annual Botaoshi or 'topple the pole' event.

The century-old game, which combines elements of rugby, sumo and martial arts, sees Japanese military cadets battle to defend or attack a pole in a game designed to promote cooperation.

Teams are usually made up of 150 individuals, split into two; an attacking and a defending team.

The attacking team aims to topple a 12-foot pole, which is protected by the defending team, which can claw, hit, shove and head-butt in a vicious display that has been banned in some schools.

To win, the attacking team must lower the tip of the pole to below 140 centimetres from the ground within 90 seconds.

Players wear very little protective gear and severe injuries are common, although there were no serious injuries on Sunday.