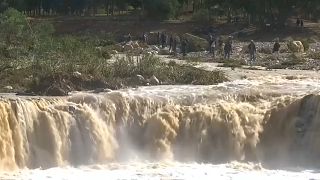 Flash floods caused by heavy rain across Jordan killed nine people on Friday and forced hundreds of tourists to seek higher ground in the kingdom's ancient city of Petra, the government spokeswoman said.

About two dozen people were hurt and dozens more evacuated from their homes in several locations in the kingdom, as floodwaters rose rapidly.

Amateur video posted online showed a powerful torrent rushing through the steep, narrow canyon through which visitors reach the Treasury, the main attraction in Petra, an ancient trading hub carved from rose-colored rock.

The video showed several hundred visitors crowded on a patch of higher ground near the Treasury as local guides helped one woman through surging water toward safety.

Ahmed Shamaseen, 29, owner of the Petra Harmony guest house, told The Associated Press he heard a thunderous sound, ran outside and saw water carrying tree stumps, rocks and debris rushing through the riverbed toward ancient Petra.

He said several shops near the Petra visitors’ centre were badly damaged by flooding.

In Wadi Musa, the town next to Petra in southern Jordan, water surged from nearby mountains into a dry riverbed running through the community.