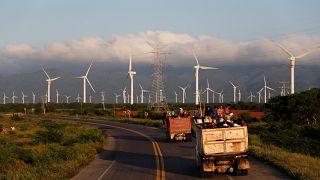 Daring sea rescue and Armistice artwork: No Comment of the week

Thousands of migrants travelled along the highway between the Mexican cities of Veracruz, Puebla and Mexico City on Monday, catching lifts from passing vehicles when possible.

The Central American migrants, who have been travelling in a caravan towards the United States in recent weeks, were planning to arrive in Mexico City and from there continue their journey to the border.

In Palermo, Italy, a funeral was held on Tuesday for nine members of the same family who drowned in flooding caused by torrential rains.

Crowds gathered outside Palermo’s cathedral and released white balloons in honour of the victims.

In the UK, an artist on Wednesday unveiled an installation composed of more than 70,000 shrouded figurines to mark the centenary of the end of World War I.

Each figure in the installation represents a Commonwealth serviceman who was killed at the Battle of the Somme and has no known grave.

Elsewhere in the UK, video footage captured the moment that rescuers airlifted two stranded fishermen from the English Channel.

The men had been left stranded when their boat capsized during a heavy storm.