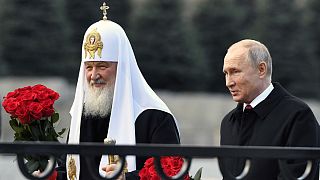 Putin was joined by Russian Orthodox Patriarch Kirill and other religious leaders as he laid red flowers at a memorial to Russian Duke Dmitry Pozharsky and merchant Kozma Minin.

The pair led a victorious popular uprising against Polish rulers in Moscow in 1612.

The day was named an official national holiday in 2005.