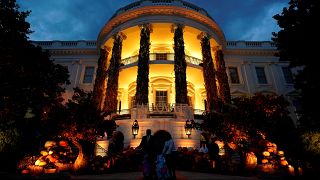 White House Halloween and underwater pumpkins: No Comments of the week

As people around the world marked Halloween this week, Euronews’ No Comment section captured some of the biggest and wackiest celebrations.

US President Donald Trump and First Lady Melania celebrated Halloween early on Sunday with a party at the White House. The couple handed out sweets to children, who were dressed as an array of characters, including superheroes, astronauts and princesses.

In Australia, the ultimate Halloween pumpkin carving competition was held at Sea Life Sydney Aquarium on Tuesday, as divers took up the challenge in the company of aquatic life of all shapes and sizes.

Similar scenes were seen on Wednesday in the US, where a group of scuba divers submerged nine metres beneath the ocean’s surface in the Florida Keys to carve pumpkins.

That evening in Hollywood, thousands of people turned out for the annual Halloween Carnaval. Revellers took to the streets dressed as ghosts and ghouls to celebrate the occasion.