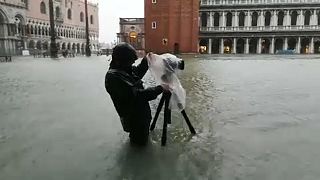 Local authorities said the high tide hit a maximum of 156 centimetres in the early afternoon - the fourth highest level ever recorded.

City officials said that up to 75% of Venice was under water. They also barred access to the central St Mark's Square, which was heavily flooded.