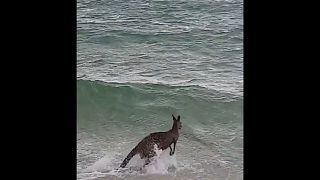 A kangaroo that hopped into the sea for a dip at a Melbourne beach had to be rescued by Australian police and brought back to life with CPR, officers said on Sunday.

Officers said they were called to Safety Beach in Melbourne as reports said the native animal was struggling in the water.

When they arrived, the kangaroo had already made its way back onto dry land and was on the sand covered with a blanket by a beach-goer.

However, as they approached, it suddenly turned around and bounded back into the waves.

Two officers jumped into the water and managed to bring the marsupial, by now unconscious, back to a grassy area and resuscitate it using compressions.