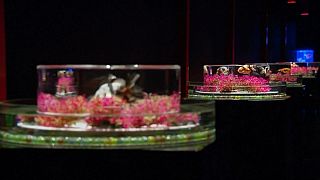 “Goldfish were introduced to Japan 500 years ago from China, and they have formed a goldfish culture in Japan and developed to this day," said Kimura.

Art Aquarium has already been held in 32 cities around the world but it is its first time in China.

The exhibition in Shanghai will run until February 17.