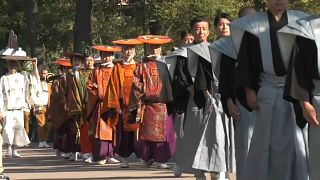 Festivals from different regions of Japan are being held in Paris as part of Japonismes 2018, an exposition to promote Japanese culture.

The 3-day programme began on Saturday at Jardin d'Acclimatation, an amusement park in the west of the French capital.

About 40 people dressed as samurai warriors paraded through the park to re-enact the battle preparations of a 16th-century warlord, Takeda Shingen. The parade is the highlight of an annual festival in Yamanashi Prefecture, central Japan.

A French cyclist Rudy Morald who dressed up as Samurai warriors in the parade said Japan is a long way from France, but he feels closer to the country now.

Parisians also had a chance to view a festival from Kasugataisha shrine in the ancient capital of Nara.