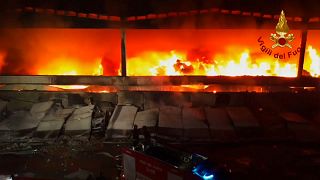 A widespread fire raged in the Milan suburb of Quarto Oggiaro burning a rubbish dump overnight on Sunday into Monday.

More than 10 firefighter teams and engines are still trying to extinguish the fire.

No houses were involved and no casualties were reported.

People living in the area were told to close the windows to reduce the toxic effect of the smoke.