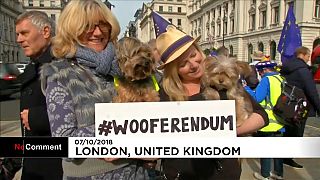 Thousands of dogs and their owners march in a ‘Wooferendum’ to demand a second vote on Brexit.

Huskies, Chihuahuas, boxers and beagles -- and even a lumbering Leonberger -- joined a "Wooferendum march" in central London on Sunday as their pro-European owners called for a new people's vote on Brexit.

The gathering commanded politicians, actors and activists, accompanied by hundreds of four-legged friends, all united in their opposition to Britain's departure from the EU next March.