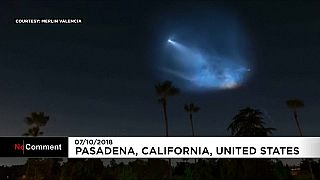 The launch was the first to see SpaceX's reusable booster land in California, and SpaceX's 30th booster landing in total. Previous launches on the West Coast have seen SpaceX's boosters land on specialised drone barges.

Meanwhile a huge display of bright green Northern Lights appeared in the skies over Rovaniemi, in the Arctic Circle, on Sunday (October 7) evening.

The lights appeared as it got dark at 1630 GMT (1930 local time) and shortly afterwards they were seen rippling across the sky.

During the evening they were seen in the form a wide arch, their colours changing from green to white to purple, and were captured on video by a local enthusiast.

The phenomenon, also known as Aurora Borealis, is a result of electrically charged particles from the sun entering the Earth's atmosphere.