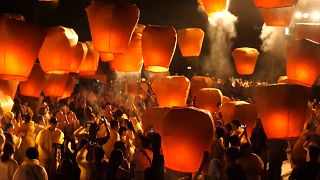 Local and foreign visitors gathered to celebrate the mid-autumn festival in Pinghsi, Taiwan, on Monday, releasing hundreds of flying lanterns that lit up the night sky.

The mountainous village has a long history of releasing flying lanterns, which were first used as a means of communication between villagers and later sent to represent wishes for the coming year.

This year marks the 20th anniversary of the sky lantern festival.