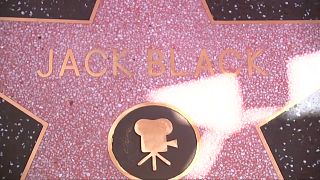 At a ceremony attended by previous colleagues including Tim Robbins, Richard Linklater, Mike White and Tenacious D. star Kyle Gass, actor Jack Black said: "I'm here to announce my retirement. No. I got the thing. I got the thing. Why continue? Once you get the thing... I made it. I have made it and I'm going to focus on diet and exercise."

Black is currently starring opposite double Oscar-winner Cate Blanchett in the Eli Roth directed The House With A Clock In Its Walls, and posed for photographs on the star.

Black, primarily known for comedies, has starred in such films as Shallow Hal, King Kong and Tropic Thunder. He is also the lead vocalist of the musical group Tenacious D.