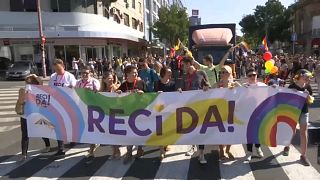 Holding rainbow flags and balloons, pride participants gathered in the city centre before setting off on a march through the streets.

Serbian police cordoned off the city centre to prevent possible clashes with extremist groups, but no incidents were reported.

Serbia's embattled LGBTQ residents face widespread harassment and violence from extremists. Violence marred the first pride march in 2001, and more than 100 people were injured during an event in 2010 when police clashed with right-wing groups and football hooligans.