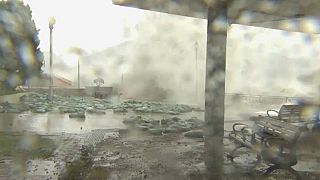 It came after the typhoon lashed  the northern Philippines with strong winds and heavy rain that left at least 36 people dead and dozens more feared buried in a landslide.

Nearly half a million people were evacuated from seven cities in Guangdong province, the gambling enclave of Macau closed down casinos for the first time, and the Hong Kong Observatory warned people to stay away from the Victoria Harbour landmark, where storm surges battered the waterfront reinforced with sandbags.

Mangkhut is due to make landfall in Guangdong later Sunday.

The national meteorological centre said southern China "will face a severe test caused by wind and rain" and urged officials to prepare for possible disasters.