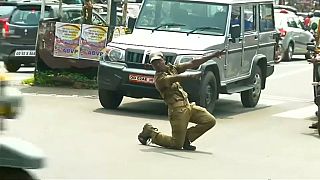 A traffic police officer in India catches the attention of drivers, using his unique moves to control traffic in the eastern city of Bhubaneswar.

Pratap Chandra Khandwal developed the technique four years ago to make people obey traffic rules and since then he has been using his moves on duty to create awareness and prevent traffic accidents.

Khandwal said on Tuesday (September 11) he came up with the idea in order to attract commuters' attention and make them follow the rules.