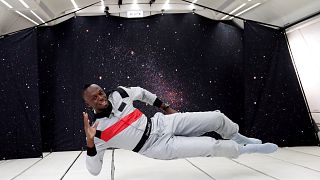 Olympic sprint champion-turned-footballer Usain Bolt was promoting a champagne brand in Reims, from where he took off on a Zero-G plane, an aircraft used by scientists for research.

The plane's aim was to reach micro-gravity conditions - in which people or objects appear to be weightless. To achieve this, the pilot performed jumps in the sky - called parabolas - which allow a free fall of just over 20 seconds long.

Bolt was subjected to 16 parabolas during a two-hour flight.