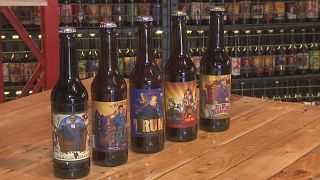 The craft brewery first launched a series of political brews back in 2016, putting three politicians on its labels.