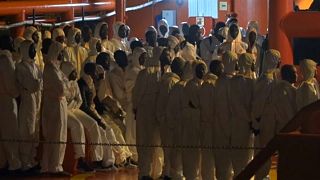 Dozens of migrants dressed in hooded white forensic suits disembarked from a rescue vessel on Thursday in the port of Motril in the southern region of Andalusia, video footage showed.

Migrants found dead or missing in Spanish waters have already surpassed the 153 reported for last year, Spanish coastguard figures show. By the end of August this year, 155 migrants had been reported dead or missing without counting the latest fatalities.