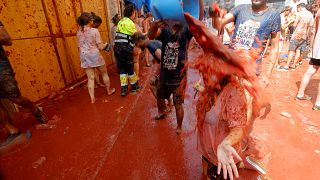 Thousands of people descended onto the narrow streets of a Spanish village to celebrate the "Tomatina" festival.

Held annually on the last Wednesday in August, around 20,000 revellers attended this year's tomato battle on Wednesday.

The streets of Buñol in the province of Valencia were left covered in fruit slush after 165,000 kilograms of tomatoes were used as ammunition for participants to hurl at other festival-goers.

Some participants donned swimming goggles while others lay in the pulp during the hour-long celebration.

The unconventional festival originates from a brawl that took place in 1945 after an argument broke out at a street market, which led to villagers hurling the closest item they could find — tomatoes.

Although banned in the 1950s during General Francisco Franco's dictatorship, the unique celebration has gained popularity over the decades and was declared a festival of international interest in 2002.